NONVIOLENCE, MORALITY, AND THE MYTHS OF TERRORISM 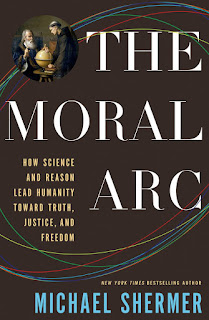 My current reading includes an interesting book from 2015 by author Michael Shermer entitled The Moral Arc: How Science Leads Humanity Toward Truth, Justice, and Freedom.  In light of the current political and social trends since the current president took office in January, I thought it might be beneficial to distill and share a chunk of information from the tail end of Chapter 2 regarding terrorism in light of the ongoing attempts by government representatives to foment fear as a method of distraction and control of the citizenry.

Let me start by first dealing with what terrorism actually is.  According to Shermer, "[t]errorism is a form of asymmetrical warfare by nonstate actors against innocent, noncombatant civilians. As its name suggests, it does so by evoking terror.  This exercises our alarmist emotions, which in turn confound our reasoning, making clear thinking about terrorism well nigh impossible."  However..."[d]espite the seemingly constant barrage of media stories of suicide bombers blowing themselves up, the long-term trends in social change over the past half century are in the direction of less violence and more moral action, even with terrorism."

So, Shermer then presents 7 myths about terrorism and explains briefly why they are myths and not truths.

Actually, "[i]n a study of fifty-two cases of Islamic extremists who have targeted the United States, for instance...terrorist motives include instrumental violence and revenge" stemming from the United States interventionist foreign policy.  Religious ideology "was a part of the consideration for most" but it was not because they were attempting to spread Sharia law but rather generated by a protectionist fear of what is seen as a war against them by the United States government.  The other motivation was "dominance and honor," that is the desire by mostly young students and immigrants to establish a heightened status for them and their families.

As much as we speak of the Taliban and ISIS/ISIL, the reality is that this idea of a "vast global network of top-down, centrally controlled conspiracies against the West" are not true.  Terrorism is decentralized and tends to be a "constantly evolving complext of social networks."

Actually, if we look here to the US, aside from the most obvious event of the 9/11 attack, which itself was pretty clearly more successful than the terrorists themselves even expected, terrorists are more often caught quickly and successfully or wind up doing more harm to themselves than those around them. 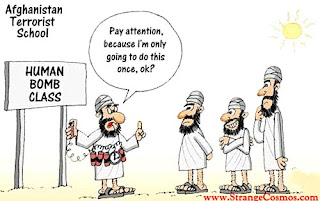 4.  TERRORISTS ARE POOR AND UNEDUCATED

Studies show that terrorists "instead of being drawn from the ranks of the poor...[they] tend to be drawn from well-educated, middle-class or high-income families.

5.  TERRORISM IS A DEADLY PROBLEM

"In comparison to homicides in America, deaths from terrorism are in the statistical noise, barely a blip on a graph compared to the 13,700 homicides a year.  By comparison, after the 3,000 deaths on 9/11, the total number of people killed by terrorists in the 38 years before totals 340, and the number killed after 9/11 and including the Boston boming is 33, and that includes the 13 soldiers killed in the Fort Hood massacre...in 2009.  That's a total of 373 killed, or 7.8 per year.  Even if we include the 3,000 people who perished on 9/11, that brings the average annual total to 70.3 compared to that of the annual homicide rate of 13,700."

6. TERRORISTS WILL OBTAIN AND USE A NUCLEAR WEAPON OR A DIRTY BOMB

Regardless of the scare language of politicians seeking votes and money, "most experts agree that acquiring the necessary materials and knowledge for building either weapon is far beyond the reach of most (if not all) terrorists."  In case you didn't know it, there's still never been a single case of a successful casualty-inducing detonation of a dirty bomb by a terrorist group. Also chemical and nuclear weapons attempts by terrorists have demonstrated them to be incompetent in this area as well.  "In short, the chances of terrorists successfully building and launching a nuclear device of any sort are so low that we would be better off investing our limited resources in diffusing the problem of terrorism in other areas."

If you're wondering just how difficult it is to make an atomic bomb, here's an excerpt from an old Analog article entitled "Build Your Own A-Bomb and Wake Up the Neighborhood":

As a terrorist one of the best methods for your purposes is the gaseous diffusion approach.  This was the one used for the earliest A-bombs, and in many respects it is the most reliable and requires the least sophisticated technology.  It is, however, a bit expensive and does require certain chemicals apt to raise a few eyebrows.  You have to start with something on the order of a dozen miles of special glass-lined steel tubing and about sixty tons of hydrofluoric acid which can be employed to create the compound uranium-hexafluoride.  Once your uranium has been converted into hexafluoride it can be blown up against a number of special low-porosity membranes.  The molecules of uranium hexafluoride which contain an atom of U-238 are somewhat heavier than those containing an atom of U-235.  As the gas is blown across the membranes more of the heavier molecules are trapped than the light ones.  The area on the other side of the membrane is thus further enriched with the U-235 containing material; possibly by as much as 1/2% per pass.  Repeat this enough times and you wind up with uranium hexafluoride containing virtually 100% core atoms of U-235.  You then separate the fluorine from the uranium and arrive at a nice little pile of domesticated U-235.  From there it's all downhill.

"[A] study of forty-two foreign teorrist organizations active for several decades...only two achieved their stated goals—Hezbollah achieved control over southern Lebanon in 1984 and 2000, and the Tamil Tigers took over parts of Sri Lanka in 1990, which they then lost in 2009.  That results in a success rate of less than 5 percent."  Another study showed that "when terrorists kill civilians or take captives it significantly lowers the likelihood of bargaining success with states, because violence begets violence and public sentiments turn against the perpetrators of violences."

Ultimately, in an analysis of 457 separate terrorist campaigns in the last 50 years not a single group "had conquered a state and that a full 94 percent had failed to gain even one of their strategic political goals."

Terrorism tends to end one way and one way only—badly (for the group and its leaders).

In contrast to terrorism (or violence) as a way to impose political change, take note of these two charts culled from Erica Chenoweth's book Why Civil Resistance Works demonstrating the success and failure rates of violent and nonviolent campaigns. 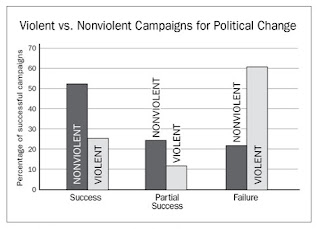 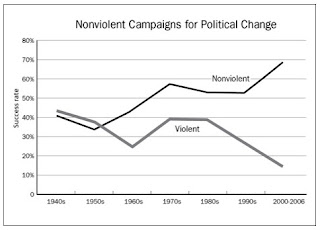 The lesson to be learned here is two-fold:

(1) terrorism is not the bogeyman the government wants us all to believe it is so that we will give up our freedoms to the state in exchange for the illusion of safety.

(2) if we are dissatisfied and disappointed with our current political system and leaders, then nonviolent means is the way to effect real and lasting change. 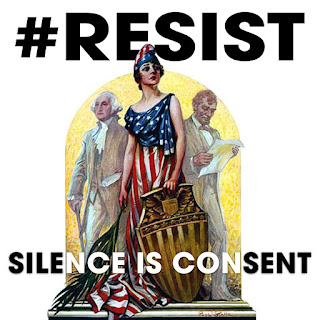