We have all seen it.  It's the classic Facebook overreaction to something innocuous.  What follows is an exact one-sided exchange excerpted (without edit) from Facebook simply because I and others posted a funny meme that makes an admittedly non-nuanced point (but isn't that the case with all memes?).

I posted this image. 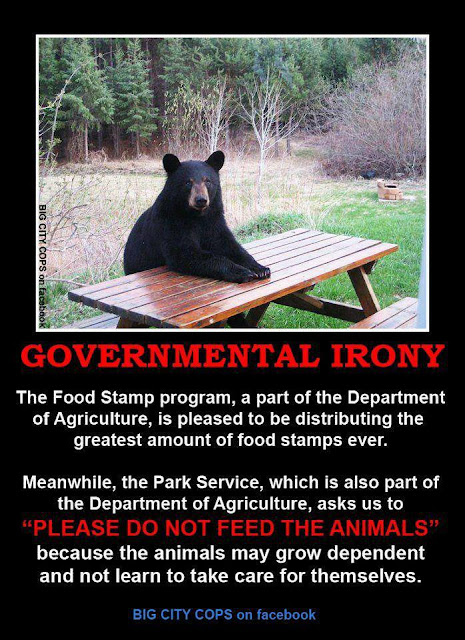 This was the reaction on the page of one of my FB-only friends:


I'm sorry, but comparing Food Stamps to feeding wild animals is pretty repulsive and finding it funny is horrible. I'd say "fuck you" but I'm not going to be so crude. Needless to say: it just shows how uncompassionate you are - which is especially weird if you consider yourself a "proud Christian." Because, as we all know, Jesus just told starving people to eat trash and all that multiplying loafs of bread and fish had nothing to do with it (though it did)! I suppose I take some offense because, when I was a child, my mother and I had to live on them for some time as she had medical problems and difficulty finding decent work due to it. I suppose, by your logic, we were just "wild animals" that shouldn't be fed because that'd make us reliant on the government...though we probably would've starved otherwise. Just keep that in mind when posting some "hilarious" pic or quip you heard...

Another fact: one of the reasons you are not to feed wild animals is because they are already capable of getting food on their own, in their particular environment. Food Stamps are usually given to those who due to long-term unemployment (which is more common these days for many reasons) and thus, were they not given such, would die of malnutrition or starvation. But I guess they're just "lazy" and should "look for a job"...even though a lot of jobs get a ton of applicants these days and thus far more difficult to actually get one. Again, are conservatives and libertarians stuck in the 1950's? It seems like they are with their reactionary attitude towards women and their dismissal of modern economic issues. Assuming that getting a job is as easy as walking up to a manager to chat with and then seal the deal with a handshake, apparently. It's particularly annoying given the same people who say this are already well-off and have work which they get paid for - it's like thinking that being lactose intolerant isn't a "real thing" because you don't have it. Having tunnel vision and unwarranted certitude doesn't make you superior, just self-involved and ignorant of your surroundings.
Don't tell me the be "open-minded" either because it is your ideology - that's not an excuse. I'd feel the same if part of your ideology involved racial segregation too, because "agreeing to disagree" means I find it sensible or valid. So, if someone isn't able to get food, they should just starve or resort to eating whatever they can find? Maybe you'll say "of course not" but what alternative do you have beyond "The Market will fix that" or "they just need to get a job"? If neither of those are possible, then the person still dies because they starved or ate rotten food from metal trash bins. I'm also quite bewildered that, though it takes up such a small percent of the budget, Food Stamps are demonized along with PBS as somehow being a "drain" on our economy. Oh, but not the over-bloated Defense budget that goes to waste anyway with things like Iraq? Not the totally ineffective and just-as-expensive "War on Drugs"? Not the bailout money to companies that failed miserably but still got them because they just so happened to be connected to Wall Street? Once you actually complain about the horrendous spending on those areas, maybe I'll take you seriously - instead of just imaging a spoiled child in a suit pointing and laughing at homeless people as he walks by and tells them to "get a job" though all they have are rags and their address is a box in an alleyway. 'Cause, y'know, that's "just sensible"... though it's really just dickish.

My short response is here on this blog.  Thank you for not saying "fuck you."  I might have been hurt by that, but at least you aren't that crude.  I would wonder when I've ever considered myself a "proud Christian."  Thanks for reading my mind and assuming all the things I would say to you if you had actually engaged me in a conversation.  I am sure they are just as accurate as any assumptions I might make about you.

As for dependency on Welfare.  Regardless of you or I and our respective experiences with it.  Here's some facts about it.  Read at your leisure.  Welfare dependency is a problem recognized by the government that issues the welfare or else we would not have report after report after report to Congress about it. Y'know.  Actually backed up with statistics and facts rather than just an embarrassing emotional outburst over a silly bumper sticker.